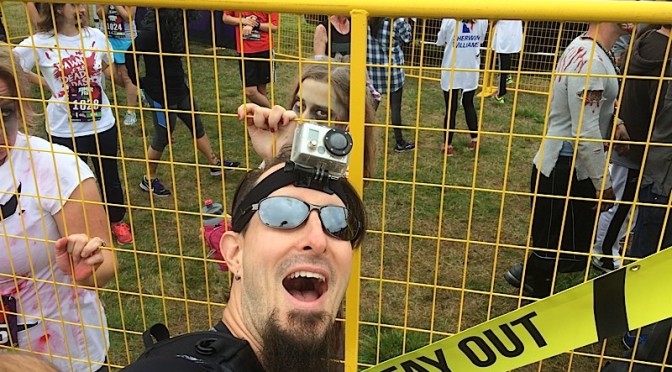 I participated in my first race where something chases you. This added a new dimension to a traditional run that made it a little more exciting too! The Energy Events Run2Survive ZombieFest 5k was really a fun run! I believe the race was closer to 4k than 5k, but the distance didn’t matter.

I got there wicked early and got a chance to stroll around the plaza to take in all of the vendors and booths. There was an area marked off for Zombie painting, to give the Zombies a more scary look, if they needed it. There was also the alcohol area, that have plenty of room for people, Kraken and Jose Cuervo Cinge for post race goodness.

Before the race, the survivors lined up and had the zombies parade between the two lines of survivors into the waiting zombie pen. The survivors all got to see who would be chasing them. I was a survivor and would be running away from the zombies. The cool thing was,the survivors got a 5 minute head-start.

Checkout the race video I made for the run below. I had two GoPro’s on me, one on my forehead and the other attached to my back, to get a rear view. I had to stabilize the back video and it still was very chaotic. Sort of fitting for the race.

I never had any zombies come up from behind, unfortunately, thanks to the 5 minute head-start. I will have to rethink my plan for next year and not run this as a race, but as a fun run and trying to evade more zombies.  Might have to slow down in some areas for people to catch up, zombies included.

I had ran like I normally do and was near the front of the pack. This meant that I was alone for a while or running with one other runner. For the zombies that were already out on the course, there were few targets, but if I had slowed down and run with a pack of people, I might have saved myself the trouble of losing my flags and may have had the penned up zombies catch up.

Messing with the Zombies pre-race.

This great shot of Dr. Worm finishing the course with loads of flags!

Ready for Rick and gang…

There were a number of cute little Daryl Dixon’s going after the Zombies.

The zombie that took my final flag…

My photo of Dr. Worm won best social media post for the event!

Even though I lost both of my flags, I’m a survivor!

This site uses Akismet to reduce spam. Learn how your comment data is processed.

My Adventures in Obstacle Course Races and Training for them

For 2014 I had a few goals, become a member of the Spartan Trifecta (complete a Spartan Sprint, Super and...